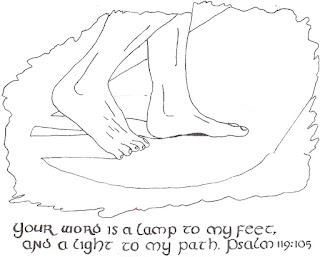 For God so loved the world that He gave His only begotten Son, that whoever believes in Him should not perish but have everlasting life. John 3:16 (NKJV)
Father, please help us respond to your love for us by loving you.

For God did not send His Son into the world to condemn the world, but that the world through Him might be saved. John 3:17 (NKJV)
Jesus, thank you for your saving help for us.

He who believes in Him is not condemned; but he who does not believe is condemned already, because he has not believed in the name of the only begotten Son of God. John 3:18 (NKJV)
Holy Spirit, help us to believe in the saving work of God the Father and God the Son.

And this is the condemnation, that the light has come into the world, and men loved darkness rather than light, because their deeds were evil. John 3:19 (NKJV)
"Your word is a lamp to my feet, and a light to my path." Psalm 119:105 When I was a lay missionary teacher with the Order of the Holy Cross (a monastic order of the Episcopal Church) in Bolahun, Liberia (1962-1963) there were times when I traveled at night using what was called a "bush lantern" (probably what we would call a Hurricane Lantern). Those walking trips through the jungle and the verse above from Psalm 119 have become for me a model of the Christian life. The lantern didn't give off much light, but it did give enough to show me the next step or two. Since I carried it by its wire handle, the lantern was down low next to my feet. Because the lantern was low, any bushes or grass beside the path would throw up large, frightening shadows which I would see if I took my eyes off the light at my feet. Sometimes as I approached a village, I would see the cooking fires in the distance. Their light was a reassurance that I was heading in the right direction, but was useless for seeing where to place the next step. For that I still had to rely on the light from my lantern – going a step at a time. Jesus, I want to walk as a child of the light, please help me to clearly see the next step you want me to take. Thank you.

For everyone practicing evil hates the light and does not come to the light, lest his deeds should be exposed. John 3:20 (NKJV)
Jesus, help us love and walk in your light.

But he who does the truth comes to the light, that his deeds may be clearly seen, that they have been done in God." John 3:21 (NKJV)
Jesus, please help me do the truth that is in you.

A Word Received: Let my light shine in your heart. Let me drive the darkness away from you.

Prayer Table/Montgomery County Correctional Facility Jail Report, St. Ann's Amsterdam, March 11, 2019
DCN ALAN and DCN MARYCAROL -- Here's our weekly report on the Monday neighborhood ministries in which we engage -- the morning Prayer Table at our church and the evening Services From the Reserved Sacrament at the Montgomery County Correctional Facility. These latest events of Monday, March 11, as always showed us clearly that God is working in our very midst.
Prayer Table -- We were starting to get discouraged at first, because only five Spanish-speaking women showed up for the first half hour or so of the table, and none of them asked for prayer. They just sought some of the free, clean clothing we offer and they also asked for some canned goods to help them get through the next few days. We were glad to oblige. But just when we were thinking of closing up shop for the day, two different men in need came in about 15 minutes apart and were needing food because they literally had nothing to eat for the next few days. We were able to help both of them with soups, stews, mac and cheese boxes, beans, rice, etc. They were extremely grateful. We prayed for the second man, who is struggling to get back on his feet. The Lord knows the details.
MCCF -- Numbers were down a bit from usual at the correctional facility, even though at the moment there are about twice as many inmates there as there were a couple of months ago. We had 12 men come to the three men's pod services, and six women attended the one service in the ladies' pod. However, attendance does not tell the whole story. The people who came were attentive and active participants, and this week they had a lot of questions and a lot of opinions. We can tell that they are interacting with bible study, bible conversations, etc., during the week when we are not there. It is obvious. One man was struck by the phrase in Paul's letter to the Romans, "No one who believes in Him will be put to shame." The man said, "I believe that!" One woman asked of the Luke gospel account of Jesus' temptations from the devil in the desert, "How could Jesus go 40 days without eating like that? That's impossible." Deacon MaryCarol pointed out to the women that Satan is the King of Liars, and that he had absolutely no power to promise Jesus any of the things he tempted him with. One man asked for a few minutes of counsel after the service in his pod, and he said "My mother raised me as a Catholic, but my grandmother is a Christian. What's the difference between a Catholic and a Christian?" (Note: That one took more than a "few minutes" to dissect and explain!) Another man asked during his service, "Why does the devil keep saying 'If you are the son of God ...?' Doesn't he know who Jesus is?" We told him, oh, you bet he does!
Please pray for these inmates who asked for your intercessory prayers for themselves and the loved ones noted: Ray (and family), Danny, Anthony (Catherine), Austin, Man (name withheld; two daughters, girlfriend), Eli, Dupree (and family), Israel (and Triniti), Diane (and Katie, Rianna), Kylie, Woman (name withheld; Richard, Jadelyn.)
Please continue your wonderful prayers in support of these ministries. God bless you!
Posted by Albany Intercessor at 7:08 AM