30 Then the apostles gathered to Jesus and told Him all things, both what they had done and what they had taught. Mark 6 (NKJV)
Holy Spirit, help us have regular times for us to “report in” to Jesus about what we have done in his name.

31 And He said to them, "Come aside by yourselves to a deserted place and rest a while." For there were many coming and going, and they did not even have time to eat. 32 So they departed to a deserted place in the boat by themselves. Mark 6 (NKJV)
Jesus, help me to have time apart with you.

33 But the multitudes saw them departing, and many knew Him and ran there on foot from all the cities. They arrived before them and came together to Him. 34 And Jesus, when He came out, saw a great multitude and was moved with compassion for them, because they were like sheep not having a shepherd. So He began to teach them many things. Mark 6 (NKJV)
Father, help us have the same compassion on all who seek of Jesus that he had.

35 When the day was now far spent, His disciples came to Him and said, "This is a deserted place, and already the hour is late. Mark 6 (NKJV)
Lord, come for me in the wilderness areas of my life.

36 Send them away, that they may go into the surrounding country and villages and buy themselves bread; for they have nothing Mark 6 (NKJV)to eat."
Lord, help us repent when we don't want to be bothered by the needs of others. Mark 6 (NKJV)

37 But He answered and said to them, "You give them something to eat." And they said to Him, "Shall we go and buy two hundred denarii worth of bread and give them something to eat?" 38 But He said to them, "How many loaves do you have? Go and see." And when they found out they said, "Five, and two fish." 39 Then He commanded them to make them all sit down in groups on the green grass. 40 So they sat down in ranks, in hundreds and in fifties. Mark 6 (NKJV)
Holy Spirit, help us receive Jesus’ instructions in the wilderness times.

41 And when He had taken the five loaves and the two fish, He looked up to heaven, blessed and broke the loaves, and gave them to His disciples to set before them; and the two fish He divided among them all. 42 So they all ate and were filled. 43 And they took up twelve baskets full of fragments and of the fish. 44 Now those who had eaten the loaves were about five thousand men. Mark 6 (NKJV)
LORD, the hungry are all around us – help us feed them from your bounty.

27 Then they came to Elim, where there were twelve wells of water and seventy palm trees; so they camped there by the waters. Exodus 15:27 (NKJV)
LORD, bring us to a time of Elim Springs where we may come and be refreshed. Thank you.

A Word Received: Look to me for springs of living water. 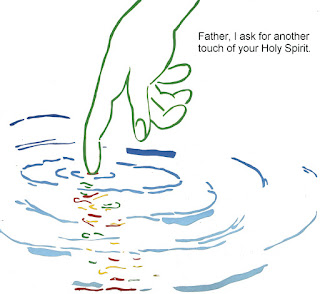 Posted by Albany Intercessor at 7:28 AM