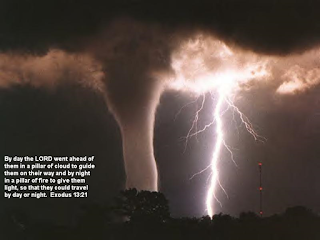 1 Now the LORD spoke to Moses, saying: 2 "Speak to the children of Israel, that they turn and camp before Pi Hahiroth, between Migdol and the sea, opposite Baal Zephon; you shall camp before it by the sea. 3 For Pharaoh will say of the children of Israel, 'They are bewildered by the land; the wilderness has closed them in.' 4 Then I will harden Pharaoh's heart, so that he will pursue them; and I will gain honor over Pharaoh and over all his army, that the Egyptians may know that I am the LORD." And they did so. Exodus 14:1-4 (NKJV)
Jesus, we trust you to deliver this diocese from the hand of those who would oppress us.

13 And Moses said to the people, "Do not be afraid. Stand still, and see the salvation of the LORD, which He will accomplish for you today. For the Egyptians whom you see today, you shall see again no more forever. Exodus 14:13 (NKJV)
Holy Spirit, help us stand still in your rightousness.

1 Then Moses and the children of Israel sang this song to the LORD, and spoke, saying: "I will sing to the LORD, For He has triumphed gloriously! The horse and its rider He has thrown into the sea! 2 The LORD is my strength and song, And He has become my salvation; He is my God, and I will praise Him; My father's God, and I will exalt Him. 3 The LORD is a man of war; The LORD is His name. 4 Pharaoh's chariots and his army He has cast into the sea; His chosen captains also are drowned in the Red Sea. 5 The depths have covered them; They sank to the bottom like a stone. Exodus 15:1-5 (NKJV)
LORD, win the victory for us. It is only by your strong right hand that we can be delivered from the oppressors of our generation.

A Word Received: Changing denominations or communions will not change hearts. I look for hearts that have been circumcised by my Holy Spirit. Come to me with hearts willing to be changed.

ST. ANN'S of AMSTERDAM -- (Mon., Feb. 1 Prayer Table report) -- Like most recent Monday mornings, it was very cold in Amsterdam and there was very little foot or even vehicle traffic in our neighborhood. But two women came by for prayer, free non-perishable food, free clean used clothing and free school/office supplies. Before you think this is disappointing, please know that a "spinoff" ministry from the Prayer Table was extremely successful this week. We were able to move a great deal of the school/office supplies which were recently donated by one of our neighbors in West Glenville. A large amount was given to Lisa Longe, who is in turn donating the items to schools in Schenectady and Colonie. Still another smaller shipment is on its way to elementary schools in Mechanicville. In addition to these events, the feminine hygiene and youth products like diapers, etc., were given to DSS to be distributed to needy persons in Amsterdam and surrounding communities. We also packed up seven boxes of non-perishable food which DSS took and will see that they go to families in our area who need food. We are happy that these "spinoff" efforts to help the needy in our area are bearing fruit and we expect to continue them.
Please remember that this coming Sunday is the first official ingathering of feminine and youth hygiene products which we again will see get to those who need them. This will occur on the first Sunday of every month for the foreseeable future.
Want more? Our church was able to provide two big boxes of clothing for two of the surviving victims of last week's fire a few blocks from us on Division Street. Father Neal (who is fire and police chaplain for the county) contacted the people and we were able to get them clothing in their sizes.
Your intercessory prayers for these ministries is felt, and we deeply appreciate it! And many thanks to office manager Jody Demers and sexton Don Clifford for their help with the Prayer Table each week. God bless you all! --- Deacons Alan and MaryCarol

Posted by Albany Intercessor at 6:07 AM